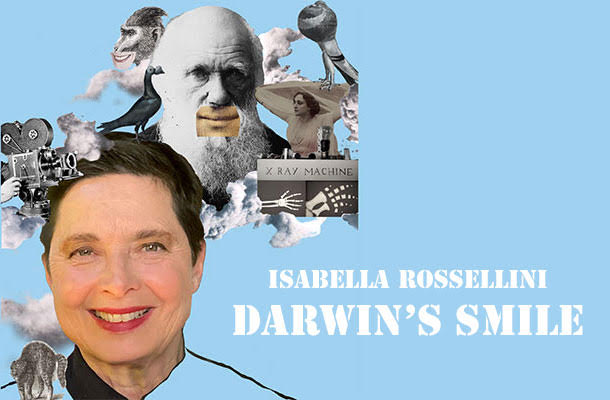 Isabella Rossellini’s new one-woman show, Darwin’s Smile, reconciles two worlds that are often at opposite ends of the spectrum: art and science. Reading Charles Darwin’s book “The Expression of Emotions on Man and Animals” revealed to Rossellini that the continuity between humans and animals can also be detected in the expression of emotions.

Rossellini explores how empathy, which is at the base of acting, is also necessary for the study of animal behavior (ethology). The show is both a lesson on evolution and acting. In her usual comical tones, she demonstrates how acting could be used to understand the mysterious nature of animals and their emotions. With humor and simple, innocent devices she plays dogs, cats, chickens, peacocks, and of course Charles Darwin.

Rossellini explains “During the covid lock down I had ample time to reflect about my passions for theater and science. It seemed that these two interests of mine were both distinct and separate: one satisfied my heart, while the other satisfied my brain. When I understood that they could be integrated, my heart and my brain finally became reconciled and harmonious.“

The show, in addition to being humorous and entertaining, is an opportunity to learn about the art of acting and about complex scientific theories. Created by Rossellini and written by Rossellini and Gregorio Franchetti, Darwin’s Smile will be directed by Muriel Mayette-Holtz, costume and set design by Rudy Soulier and with original music by Cyril Girouz. The Cucalorus performance continues the festival’s long-standing tradition of honoring David Lynch’s indie classic Blue Velvet through the program known as ‘The Bus to Lumberton.’ Rossellini starred as Dorothy Vallens in the production, which was filmed in Wilmington in the 1980s.