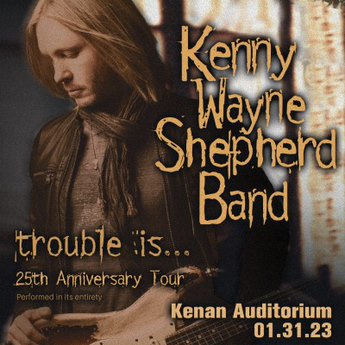 Kenny Wayne Shepherd is over two decades into a recording career that began when he was just 16. He has sold millions of albums worldwide and, in addition to his five Grammy nominations; he has won two Billboard Music Awards, a pair of Orville H. Gibson awards, the Blues Foundation’s Keeping The Blues Alive award and two Blues Music awards. He’s had nine #1 blues albums and a string of #1 mainstream rock singles.

Shepherd is bringing his talents to UNCW’s Kenan Auditorium to share with Wilmington and surrounding areas. This is a show and lively performance you won’t want to miss out on! Join us at Kenyan Auditorium January 31st at 7:30 p.m. with your friends and family for an unforgettable evening!