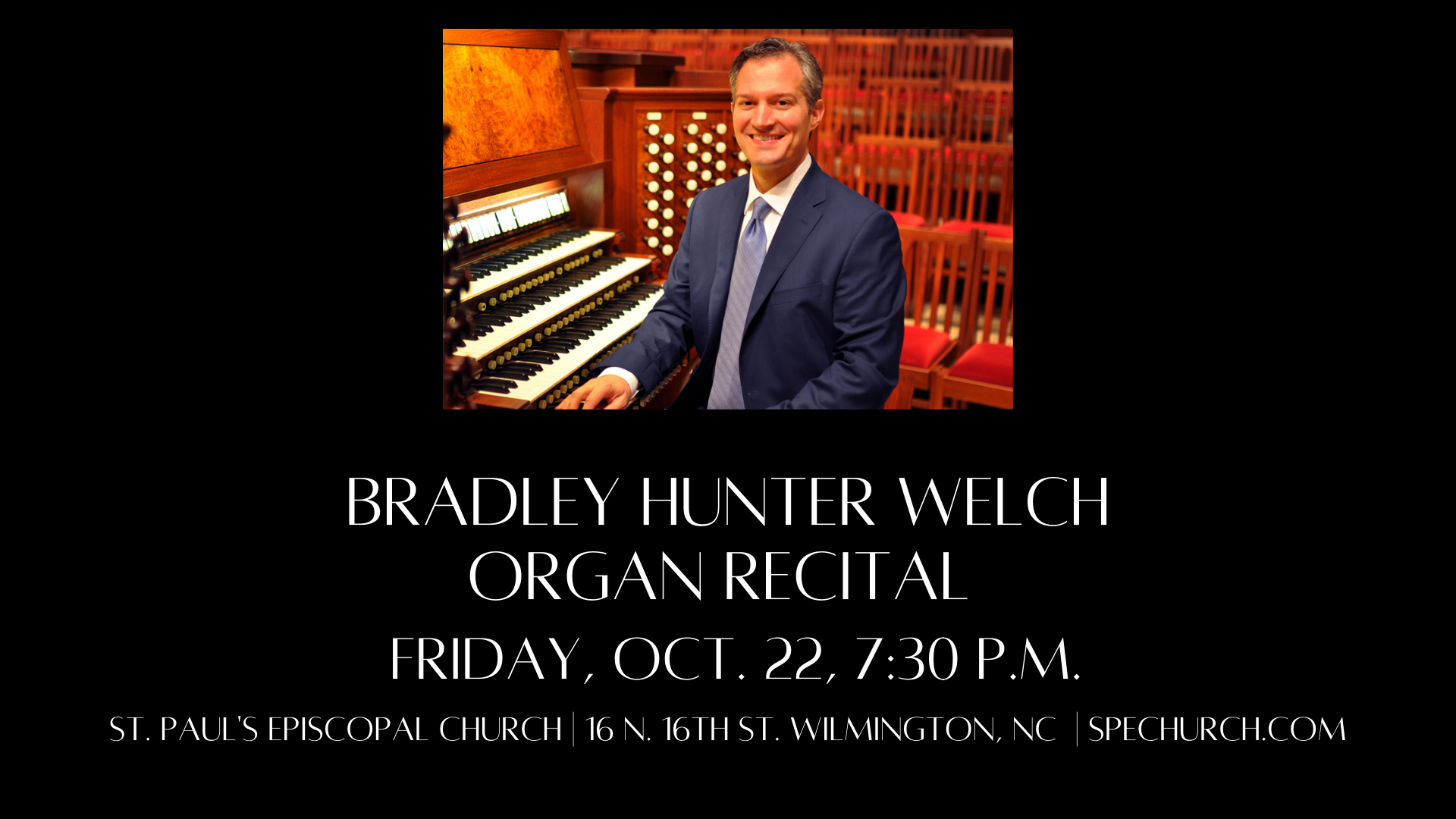 Bradley Hunter Welch will perform an organ recital at St. Paul’s Episcopal Church in Wilmington on Oct. 22 at 7:30 p.m.

Hailed as “A world-class virtuoso” and “an expert at defining darks, lights, shadows and colors,” Bradley Hunter Welch is increasingly in demand as a recitalist, concerto soloist, and collaborative artist. A native of Knoxville, TN, Bradley holds the Doctor of Musical Arts, Master of Musical Arts, Master of Music degrees, and the Artist Diploma from Yale University where he studied with Thomas Murray and Martin Jean. He also holds the Bachelor of Music degree magna cum laude from Baylor University where he studied with Joyce Jones. Dr. Welch has also continued his study of organ and piano technique with Sheila Paige.

Dr. Welch is the 2003 First Place winner of the Dallas International Organ Competition and was also awarded the Audience Prize for the second time, having previously won it in 2000. In 2005, he was a featured artist at three regional conventions of The American Guild of Organists, and he made his European debut in France performing in the Chartres Festival. He has appeared as soloist with the Grand Rapids Symphony Orchestra, the Fort Worth Symphony Orchestra, and the Dallas Symphony Orchestra. With the DSO, he gave the world premier of Stephen Paulus’ Grand Concerto for Organ and Orchestra, the piece written for Bradley as the winner of the Dallas International Organ Competition.

Additionally, he has taught at Southern Methodist University and Baylor University. He was Director of Music & Arts at Highland Park United Methodist Church in Dallas, TX from 2009 to 2014 and currently devotes his full-time attention to a thriving solo concert career. Between his concert and recording engagements, Dr. Welch serves as Artist-in-Residence as Christ Church (Anglican) in Plano, TX–one of the largest Anglican churches in the United States. In addition to these duties, he performs approximately 20 concerts annually under the exclusive artistic management of Phillip Truckenbrod Concert Artists, Hartford, CT.

His premier recording is the first solo organ recording of the Cliburn Organ at Broadway Baptist Church. Bradley is married to Kara Kirkendoll Welch, a flutist in the Dallas Symphony Orchestra and Adjunct Professor of Flute at Southern Methodist University. They have a son, Ethan Hunter Welch, and a daughter, Avery Kristine Welch.