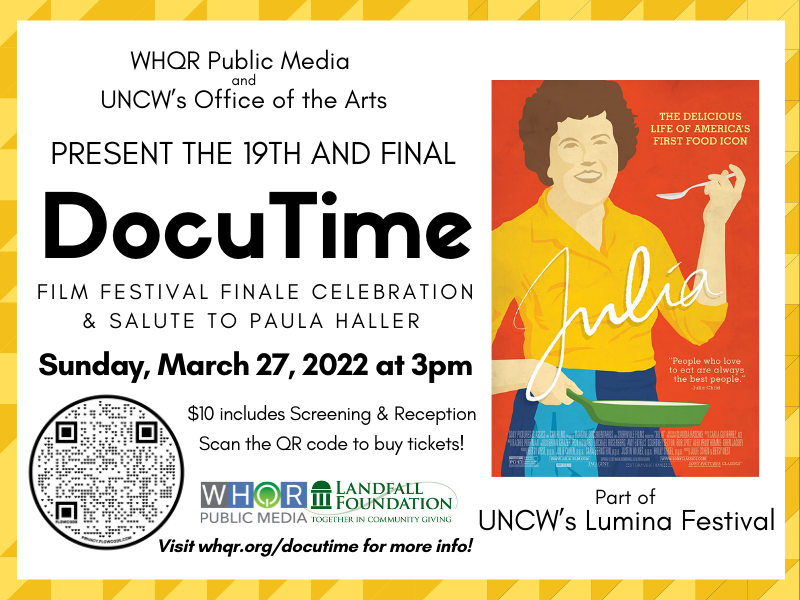 DocuTime will celebrate its 19-year history with a final event featuring a screening, reception and salute to Chair and founder Paula Haller. The celebration of the very last DocuTime will happen at Kenan Auditorium at UNCW on Sunday, March 27 at 3pm. DocuTime Finale is part of UNCW’s Lumina Festival 2022.

Tickets are $10 and include a screening of Julia and a light reception.

Julia brings to life the legendary cookbook author and television superstar who changed the way Americans think about food, television, and even about women. Using never-before-seen archival footage, personal photos, first-person narratives, and cutting-edge, mouth-watering food cinematography, the film traces Julia Child’s 12 year struggle to create and publish the revolutionary Mastering the Art of French Cooking (1961) which has sold more than 2.5 million copies to date, and her rapid ascent to become the country’s most unlikely television star. It’s the empowering story of a woman who found her purpose – and her fame – at 50, and took America along on the whole delicious journey.

DocuTime originated in Los Angeles as an International Documentary Association (IDA) sponsored event. One of the founders of IDA, Paula Lee Haller, relocated to Wilmington, and it was her dream to expand IDA events to other venues. After successfully launching the inaugural DocuFest-Wilmington in 2003, the festival is now celebrating its 19th and final year. DocuTime is so thankful to the many wonderful volunteers who have helped throughout the years and to UNCW’s Department of Film Studies for all of the partnership and support.