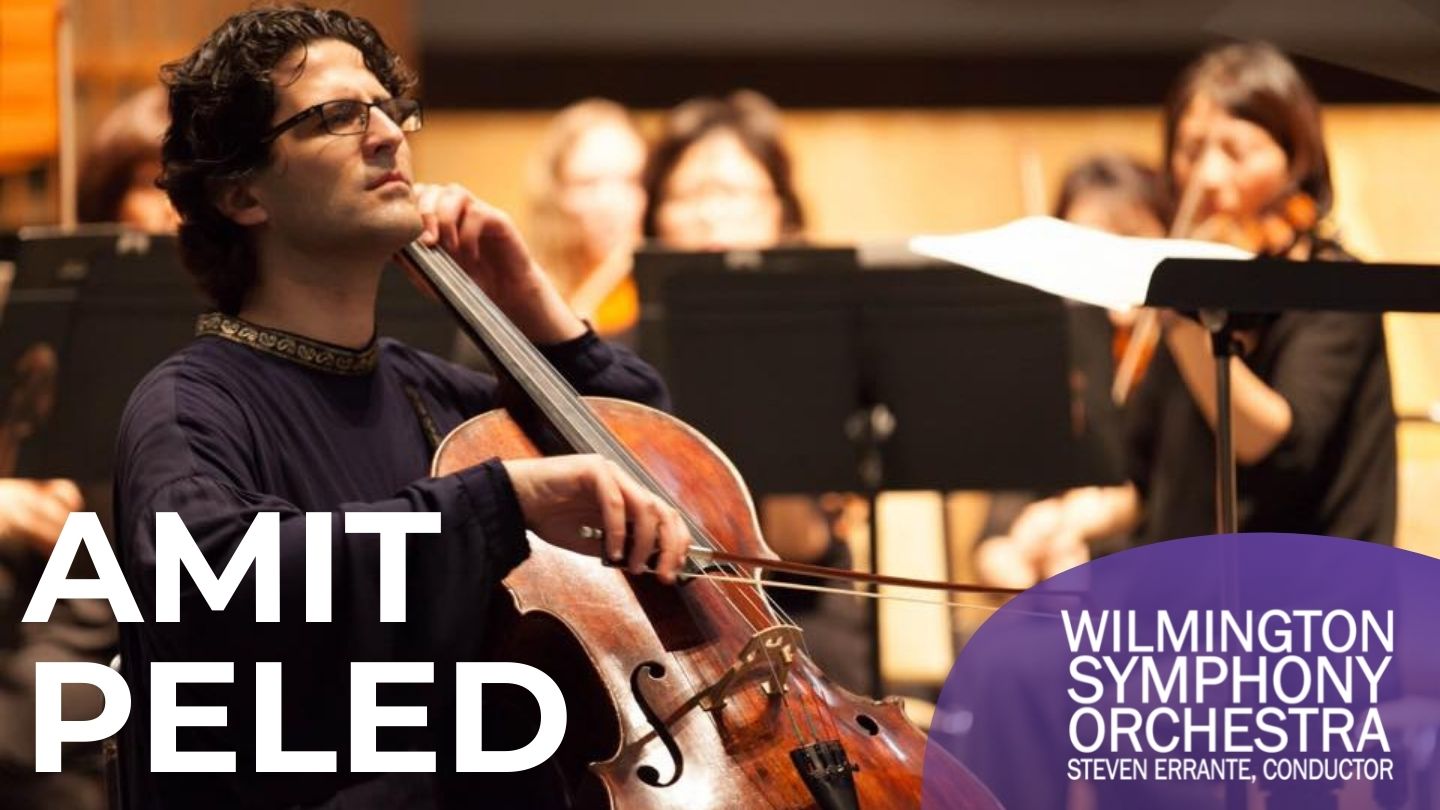 Amit Peled will perform Haydn’s Cello Concerto in C and Bruch’s Kol nidrei on the Wilson Center stage with the Wilmington Symphony Orchestra. This concert will also feature Symphony No. 4 by Brahms.

2022-23 Season is sponsored by REEDS Jewelers, Brightmore of Wilmington, and Carolina Bay at Autumn Hall.

AMIT PELED
​​Praised by The Strad magazine and The New York Times, internationally renowned cellist Amit Peled is acclaimed as one of the most exciting and virtuosic instrumentalists on the concert stage today. Having performed in many of the world’s most prestigious venues, including Carnegie Hall and Alice Tully Hall at the Lincoln Center in New York, the John F. Kennedy Center for the Performing Arts in Washington D.C., Salle Gaveau in Paris, Wigmore Hall in London, and the Konzerthaus Berlin, Peled has released over a dozen recordings on the Naxos, Centaur, Delos, and CTM Classics labels. Musical America named Peled one of the Top 30 Influencers of 2015.

Recent career highlights include Bach Suite cycles in the United States, Europe, and Israel; performances of the Saint-Saëns Cello Concerto at the Kennedy Center; a debut collaboration with the Peabody Chamber Orchestra led by Maestra Marin Alsop; a return to the Ravinia Festival in celebration of Peled’s recording of the Brahms Cello Sonatas on the Goffriller cello (1733) once owned by the legendary cellist Pablo Casals; a return visit as a soloist to the Casals Festival in Puerto Rico; performances of the Shostakovich Cello Concerto and Penderecki’s Second Cello Concerto conducted by the legendary Krzysztof Penderecki himself; Schubert’s Arpeggione Sonata recorded on the Casals cello; and a worldwide musical celebration of Beethoven’s Sonatas for Cello and Piano to commemorate the composer’s 250th anniversary.

An enthusiastic chamber music artist, Peled is a member of the acclaimed Tempest Trio with violinist Ilya Kaler and pianist Alon Goldstein. Peled also performs with Goldstein and clarinetist Alexander Fiterstein as a member of the Goldstein-Peled-Fiterstein Trio.

One of the most sought-after cello professors in the world, Peled is a professor at the Peabody Institute at Johns Hopkins University where he has taught since 2003 and was one of the youngest professors ever hired by a major conservatory. He has instructed students who have gone on to garner top prizes at international competitions such as the Carlos Prieto International Competition in Mexico, the Schoenefeld International Competition in China, and Young Concert Artists Guild in New York. Embracing the new era of the pandemic, Peled recently established the Amit Peled Online Cello Academy in order to reach cellists all over the world with private lessons and in-depth courses on his First Hour technique method.

Passing on the tradition in which he performed with his mentors Bernard Greenhouse and Boris Pergamenschikow, Peled regularly performs with the Amit Peled Cello Gang. Composed of students from Peled’s studio at the Peabody Institute, members of the Cello Gang range in age from undergraduate freshmen to second year master’s students. Peled and the Cello Gang tour regularly around the country with recent performances at the Cape Cod Chamber Music Festival, the Society of Four Arts in Palm Beach, the Fairfax Symphony Orchestra, as a resident ensemble in San Miguel de Allende, Mexico, and all across Maryland, the gang’s home state. Peled is also the founder, conductor, and artistic director of the Mount Vernon Virtuosi, a chamber orchestra dedicated to nurturing the careers of recently graduated music students, which annually performs a four-program season in Baltimore, Silver Spring, and Rockville, Maryland.

Raised on a kibbutz in Israel, Amit Peled began playing the cello at age 10. From 2012 through 2018, Peled performed on the Pablo Casals 1733 Goffriller cello, which was loaned to him personally by Casals’ widow, Marta Casals Istomin. Today, he performs on a cello made by the Italian master Giovanni Grancino, ca. 1695, on generous loan from the Roux Family Foundation.